Perspectives on the Circassian Identity 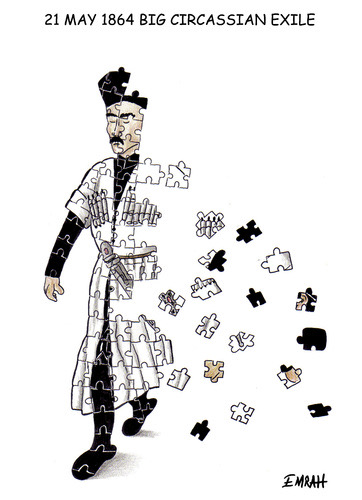 In short, dependency and indifference, as well as lack of interest in the national issue, will necessarily lead in the medium and long term to the loss of the Circassian national identity. Failure to take a proper action at the appropriate time leads to keeping tyrants and their supporters “stew in their own juice.”

It seems that the Circassian bodies and institutions are not at the level of the challenges facing a nation that forces of evil and aggression  could not eliminate, despite the passage of more than one hundred and fifty-eight years since a catastrophe that is unique of itself, which ravaged its homeland, wiped 50% of the nation inhabitants and displaced the rest between the homeland and the homelands of diaspora and alienation. In any case, the identity consisting of the homeland, the people or the nation, national symbols and civilized values have survived the extinction.

The description that says: “the majority are profiteers” is a realistic estimate of that part of society, and unfortunately for those who want to make room for themselves and their supporters. However, it is not possible to advance in any field of life without showing initiative and opening the way for everyone equally to express their opinions and suggestions, to agree on a common agenda that they gather or the majority of them agree on, and to work jointly on dealing with the various issues of the Circassian Question.

It is rumored that the majority of Circassian institutions are absent from reality, even those in charge of them see themselves above criticism, and therefore, they and their supporters have the right to criticize the activist workers, impede the progress of the activists, make accusations arbitrarily against them in all directions, knowing that the associations and social forums represent only their registered members in their official records. None of them is entitled or allowed to represent those who do not work within their institutional circle.

“If you want a thing done well, do it yourself,” and rights will not be restored without unifying the visions, methods, and goals. It is not permissible to wait for a savior who may not come at all, therefore what can be saved must be saved by self-effort, as there will be no one else. Every individual has the right to demand the restoration of Circassian rights, as long as he does not neglect legitimate rights, and thus firmly believes in the Circassian national identity.

Unfortunately, the Circassians are in an unenviable situation, as they have no possibility at the present time to free themselves from the control of others, and to decide or choose appropriate solutions for them, whether in the motherland or in the countries of the diaspora.

Solutions can be reached through the independence of the institutional decision and popular participation.

The freedom to choose the approach or goals that suit the solution of the intractable issue and the restoration of legitimate rights, should eventually lead to the right to self-determination, and to choose the appropriate system that suits the future of the people of Circassia.

An example of the lack of positive awareness and a sound future outlook, is the arbitrary or random adoption of agendas and decisions. This was according to what happened in one of the conferences, which was held a few months ago in the city of Istanbul, where a group of organizers, attendees and participants had the opportunity to take a decision to withhold a video presentation on the subject of the Ukrainian Parliament’s recognition of the Circassian genocide. This happened under the pretext of not getting involved in a war in which they are not part of. Whereas, after a short period of time, the Russian state decides to recruit Circassian youth in the homeland to throw them into the furnace of the Russian war against Ukraine. This coincides with the poet’s saying: “Practice what you preach.”