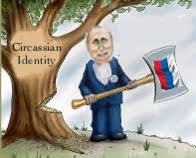 Since the early time of invasion and occupation of Circassia, the Russian state has been tirelessly implementing its infernal and exclusionary plans, secretly and openly, and through the central and regional authorities represented by their security arms and agents. This comes in the context of undermining the foundations of the Circassian identity, as the ruling system did not hesitate to do what it could in order to establish the tragic fait accompli and eliminate the nation and its identity, and consolidate the status quo according to a systematic Russian colonial plan that ultimately aimed to eliminate the remaining symbols of the Circassian identity and civilization. The identity is represented by language, culture, customs, traditions, arts, etc., which in their entirety express the authentic identity that emanated from the Circassian homeland.

In short, the significance of what is happening is the fact that the oppressed nation has spread in wide geographical locations. Only 10% of them, numbering about 800,000 people, reside in the historical homeland, scattered in several Russian administrative regions of the North Caucasus. There are three of them considered autonomous republics; but others in regions that belong to Russian administrative regions. The rest (90%), who were deported to the Ottoman Empire, are distributed in diaspora and alienation in more than thirty countries of the world. The important thing is that those who lived in their homeland got their rights almost trampled on, and do not enjoy the least basic rights as full-fledged citizens. In addition, they are under the semi-direct rule of Moscow and those who are appointed and authorized to implement Russian laws and rules.

It is well-known that the articles of the Russian Constitution, which are reproduced and changed from time to time, are intended to coincide with the goals of gradually eliminating the languages and cultures of multiple peoples, who are under the Russian subjugation. Thus melting these peoples in the Russian crucible. Amendments and changes are being made in the wording of some articles of the Constitution to comply with the interest of the Russian majority only, according to a formula that is in line with the policies and objectives of the state.

It’s appropriate to mention in this scope what happened in the Republic of Kabardino-Balkaria in recent years. It is a vivid example of what is happening elsewhere in the Circassian homeland. This is reminiscent of one of the frequent cases that reflect the inescapable realities under which it takes place and is applied by the authoritarian authorities. Lessons can be taken from what happened with Martin Kochesoko, Kase Kik, and others, not to mention the closure and ban of Circassian entities and institutions.

In light of what is happening at the present time, it is necessary to refer to what has been and is still constantly happening to the Circassian researchers and academicians in their homeland, specifically with Dr. Madina Khakuasheva in Nalchik, KBR.

It is worth noting that the importance of the topic requires mentioning the following events and occurrences that were published in a previous article,[1] which are mentioned in regard to one of the recurring case:

— On June 9, 2018, Madina Khakuasheva, a senior researcher at the Kabardino-Balkaria Research Institute of Humanities, published an article in which she spoke about the amendments and gradual changes taking place in the Russian Federation to the Education Law, stating: “We have only one sacred channel of communication – from top to bottom, but the one from bottom to top, thus it has not worked for a long time, but it did work at one time. However, it is precisely this circumstance that constitutes the {Achilles’ heel} of federal representatives of different branches of government, since the rhetoric that they still use, without further ado, has been delayed for 50 years and has not been taken seriously for a relatively long time.” The scholar  added: “The majority of people all this time have been more silent because of this one-way communication, but not only because of tiredness, indifference, and the absurdity of the issued decrees (as you know, the most difficult thing to dispute is the absurdity, especially if it is so obvious). But even from the people’s silence and patience, those in power learned to inject gains, and interpreted silence as a sign of acceptance. But that was the case until the current law bill, which was a kind of red line, the intersection of which changed everything.”[2]

— On April 27, 2020, Madina Khakuasheva said: “Moscow’s falsification of the Circassian history and its disavowal of the imperialist nature of Russian policy that led to the displacement of most of that nation’s members not only shows that the Russian government is committed to the neo-colonial agenda, but continues the path of ethnic genocide.” Khakwasheva continues: “Russia’s approach to non-Russians has gone through the following four stages in the case of the Circassians: physical destruction and deportation without the right of return, outright discrimination against the mother tongue, level of culture and identity, and the complete elimination of Circassians’ history of books and museums. In addition, Moscow continues to work to create “all conditions for the realization of artificial assimilation and the erasure of all evidence of the existence of an entire people,” including declaring the lands and resources of those territories as Russian {from time immemorial}.” This is {the ultimate goal of geopolitical control}.”[3]

— On July 11, 2020, a senior researcher at the Kabardino-Balkaria Humanities Research Institute published on the website of the “Kabardino-Balkaria Regional Center for Human Rights” that it was planned in Belorechensk, a city in the Krasnodar region on the Belaya River, to erect a monument to General Nikolai Evdokimov, one of the main architects of the Circassian Genocide. However, the wave of widespread public anger prevented or delayed this initiative. “In the Krasnodar Province, many monuments bear the name of the cannibal General Zas.” Two monuments to General Yermolov were erected in the Stavropol Province. And now — Evdokimov. It seems that someone is doing everything possible so that the Circassian people do not forget the tragedy of the past centuries” — as public figure Ibrahim Yaganov said in an interview with the “Caucasus Facts” Website.[4]

In the spirit of “Language is the road map of a culture, It tells you where its people come from and where they are going,” by Rita Mae Brown, [5] we find the elite of the educated people are doing their best for the sake of self-preservation of a nation with unified goals and aspirations, coherent roots and a homogeneous base with a culture that emerged in the Northwest Caucasus thousands of years ago until now, despite all the obstacles and barriers.

In a “Window on Eurasia”, it is reported that “Over the past decade, Moscow and its representatives in the Kabardino-Balkarian Republic (KBR) have gone from ignoring those who bring attention to threats to indigenous languages to harassing and suppressing them in hopes of silencing them and preventing others from finding out what is going on.” says Madina Khakuasheva, Senior researcher at the Humanities Research Institute of the Kabardino-Balkaria Center of the Russian Academy of Sciences, an institution that itself came under serious attack,[6] she is one of the most privileged people who are now subjected to such repressive measures.”[7]

This proves beyond any doubt that the policy of colonial acquisition proceeds to achieve its goals without concern for what may result out of it, despite the fact that the Russian invasion of Ukraine is trying to entice different nationalities to support its colonial policies to occupy the territories of an independent and sovereign state, without regard to the neighborhood values and international laws and norms. However, it seems that interest in the Circassian language and resistance to the threats to this indigenous language is a core challenge to the policies and plans of the Russian state. They have spared no effort since the Russian-Circassian war to this day to dwarf the Circassian language and its ancient culture. Not to mention the fact of opposing the right of return and obstructing those who wish to return and repatriate to their historical homeland by police tactics and fascist methods.

“Stressing that she and her colleagues “have never gone beyond the limits of the law, the KBR scholar says that five weeks ago the FSB and its local agents raided her home and office, seizing a variety of documents and computers and then interrogating her without providing any legal documentation or explanation. Before this happened, Khakuasheva says, she and her colleagues had been subject to anonymous attacks in the media, attacks which she did not react to because of their “complete absurdity and provocatory nature” but which now appear to be part of a more general campaign involving the Russian and KBR security services”.[8]

It is necessary to expose these rude practices of bullying, which are considered uncivilized, practiced by the ruling junta in the Circassian homeland against the citizens who “grasp onto hot embers,” and live in their original homeland, Circassia; but they did not hesitate to protect the origins of their national identity, and thus defend their dignity, language and authentic culture.